Fr. Colter was born in Waterloo in 1940 and attended Catholic schools there. After graduating from Loras College in 1962, he spent four years in theological seminary in Louvain, Belgium, and was ordained there in 1966. Father was assigned to various parishes and high schools in the Archdiocese of Dubuque and took further degrees from Fordham University in New York, Xavier University in Cincinnati, and the Angelicum in Rome. He has also been Vocation Director for the Archdiocese and a professor of theology at Loras College. In 2010, Fr. Colter attempted to retire but spent most weekends preaching across the country for the Christian Foundation for Children and Aging. In September of 2011 he became full-time Parochial Administrator of St. Patrick and Pastor on March 1, 2012. In 2016, Father Colter celebrated his 50th anniversary of ordination. 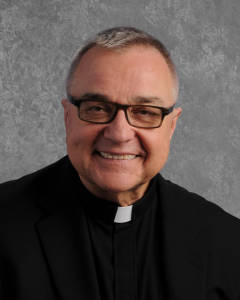