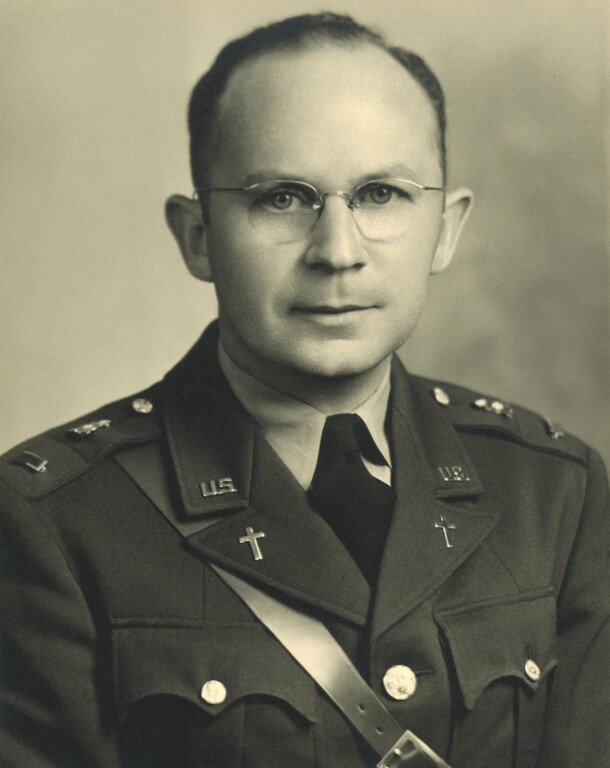 Msgr. Maurice A. Mullan was born January 21, 1907 in Mason City, Iowa, the son of Charles E. and Anna Maria Chute Mullan. He grew up in Mason City, graduated from St. Joseph’s High School, and from Columbia (now Loras College) in Dubuque.

Msgr. Mullan took his seminarian training at the North American College, Rome, Italy. He was ordained in Rome on December 8, 1931 and said his first mass at St. Joseph’s Church in Mason City, July of 1932. During World War II, he served as U.S. Chaplain in the Pacific Theater and at Pearl Harbor, Hawaii. 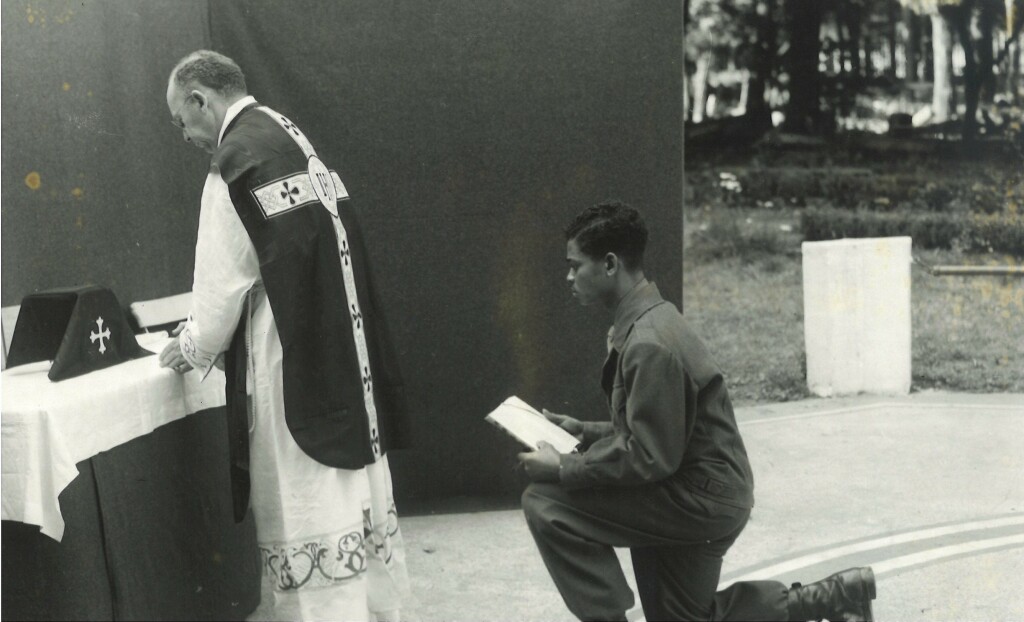 He served parishes at Cedar Rapids, Fort Atkinson, Forest City, Eagle Grove, and 13 years at Saint Patrick Church, Cedar Falls, and the former Saint Mary’s at Dike. His last parish was Sacred Heart at Grundy Center as well as the Reinbeck Church.

Msgr. Mullan was a member of the Pearl Harbor Survivors Organization, American Legion Post at Cedar Falls, and the Order of Elks at Cedar Rapids.

One of the first Catholic chaplains entering the service when the Army expansion program began, Major Mullan was commissioned a First Lieutenant September 1, 1940, and assigned to the Second Armored Division at Fort Benning, Georgia. While there, he took part in a high-profile mass exercise in which General George S. Patton led 1,000 tanks and vehicles from Columbus, Georgia, to Panama City, Florida. “Old Blood and Guts," was a Patton nickname, quietly shared by those under his command.

In July of 1941, he was transferred to Hickam Field in Hawaii and underwent the Japanese sneak attack December 7. Well remembering that fateful morning, he recalls he was preparing to celebrate 8:30 a.m. Sunday Mass when the first wave of Japanese planes appeared. The 6:30 Mass already had been celebrated but the masses scheduled for the rest of the morning had to be “canceled.” One of the things Chaplain Mullan would tell people when they asked about the attack was, “That was the day Boys became Men."

A story Msgr. Mullan told about the Pearl Harbor Attack: “Father Al Schmitt had been over to see me just a few days before and we had planned to have dinner on-board the following week. That was the last time I saw him. I have talked with some of the men who were with him and their stories all run along the same theme as the one that appeared in The Witness. One of the young men, who was perhaps the last man to see him alive, said that as oil rushed through the hatch, Father Al was carried under the surge and that he did not see him come up. Thus ended the labors of one of the finest young priests in the corps.” (Father Schmitt was also from the Archdiocese of Dubuque)

Major Mullan remained at Pearl Harbor until November, 1942, when he transferred to Espiritu Santo in the New Hebrides with a heavy bombardment group. Then followed a hectic tour of duty with American forces through the Solomons campaign.

The New Hebrides presented many areas of battle. On Espiritu Santo, Msgr. Mullan talked about a 6,000 foot long runway cut from the jungle. There were coconut plantations, three hospitals, a giant fuel tank farm, floating docks to repair ships, and ammunition bunkers, all used by the 100,000 soldiers there. The U.S. ship, President Coolidge, hit two of our mines in the Harbor of Espiritu Santo. The loss of this valuable ship that helped supply our army was a huge blow.

Msgr. Mullan was a Unit Chaplain from November 1942, to December 1943. He served on the islands of Guadalcanal and Bougainville. He talked about being knee deep in mud while at the same time being hit in the face with dust that continually filled your eyes. Msgr. Mullan said Mass on a ship following the Battle of Guadalcanal in November of 1943. He was transferred to the 13th Air Force headquarters on New Caledonia, from December 1943 to May 1944.

In June of 1944, Msgr. Mullan came back to Louisiana and called home in Mason City to check on his mother and found out she had passed away a month before. He spent some time at the military bases in Louisiana and California. The end of his active career was spent in occupied Germany after the end of the war. He was in Erlangen and Wiesbaden as well as the surrounding areas. When he visited Berlin he noticed that the Russian soldiers, who you would see on the streets during the day, would vanish at night.

Msgr. Mullan wanted to remain on active duty, but the Bishop wanted him to serve in a Dubuque Archdiocese Parish.